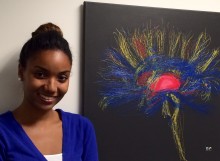 Dr. Shellie-Anne Levy earned a Ph.D. in Clinical Psychology with an emphasis in Neuropsychology from Howard University.  She completed psychology internship at the University of Florida. She is currently a Postdoctoral Associate within the Department of Clinical and Health Psychology. Research interests include examining cognitive function and trajectory in older adults with Mild Cognitive Impairment (MCI) and neurodegenerative disorders such as Parkinson’s disease, Alzheimer’s disease, and related dementias.

Currently, Dr. Levy assesses cognitive changes in Parkinson’s disease and their relationship to gray matter structures and white matter integrity using structural brain MRI. This work was supported by a training grant from the National Institute of Neurological Disorders and Stroke (NINDS).

She was recently awarded a grant from the Alzheimer’s Association to increase minority engagement in a cognitive rehabilitation program for MCI to determine its potential benefit for improving functional outcomes.  Ultimately, she hopes to develop an independent research program to reduce the disparities that influence the onset, diagnosis, and treatment of MCI and neurodegenerative disorders in ethnically diverse populations.